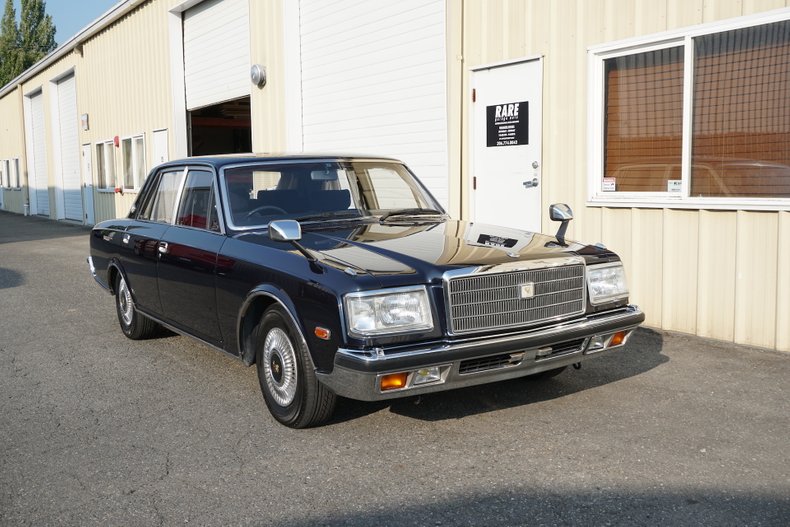 The Toyota Century is the epitome of high end Japanese engineering, created in 1967 as Toyota's Flag ship luxury car for CEO's and business men, this Century was hand made to order and only received minor changes until its redesign in 1997. This 1990 Toyota Century Luxury Sedan featured here is finished in stunning factory Cilin Blue Pearl Metallic with a gorgeous matching blue interior and almost no age or wear marks to speak of! This magnificent motorcar is one of just a handful known to exist in the U.S. With limited production, hand-built construction, incredible power features and amenities, the Century is regarded as the Rolls-Royce of Toyotas. This 1990 Toyota Century Luxury Sedan is the ultimate collectible and would make a great addition to any prominent
collection.

The interior is fitted with the factory privacy curtains and reclining seats with a pass through in the passenger seat to turn your recliner into a bed. From remote control air conditioning and full functioning radio controls, to a massage seat function, oscillating fans, and even a tape recorder with microphone input in the back seat arm wrest, this car is fitted for you to have a full first class experience!

With only 13k miles on the VG40 4.0 L V8, it starts and runs like it was fresh off the production line! The air ride suspension and engine power prove that this car was meant for luxury and Toyota nailed it! This classic vehicle that would be a great addition to any car collection, Don't miss an extremely rare opportunity to own one of Japan's most coveted models!

Thank you for your interest! We'll get back to you soon!